I wish we have places like these in Riyadh: 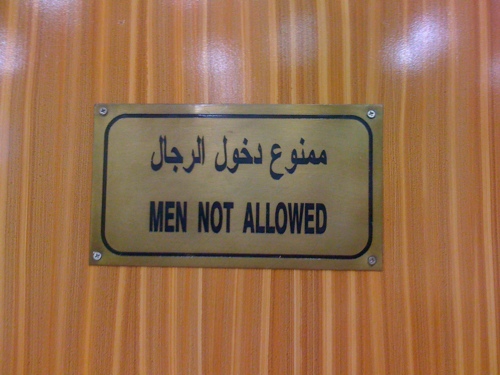 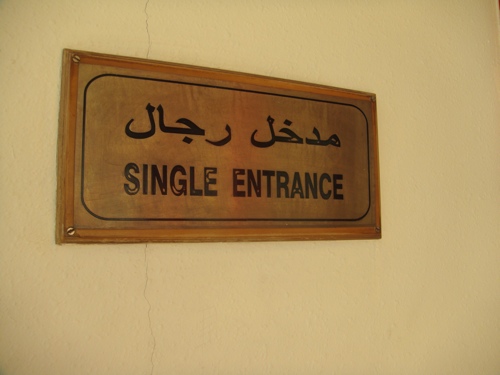 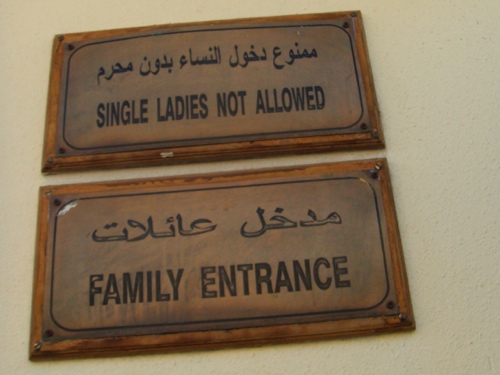 It is often said that in Riyadh people either pray or shop, and other than that not much is going on here. Tomorrow, however, will be an exception: Smile Productions are presenting a night of live stand up comedy performance, featuring Steve Gribbin and Kiven Bridges from the Comedy Story in London. The show will also feature 3 local talents for the first time on stage, so this should be interesting too. If you need more information, please contact Peter: phowarthlees@mac.com or call him: 0594370662.

Despite the fact that cinema theaters are not allowed in the country, it seems that an active community of movie enthusiasts is flourishing these days in Riyadh, offering several opportunities for people to watch films at special screenings in different parts of the city. If you are in town these days, you might want to check them out. Here’s a short guide for the movies that will be screened starting tomorrow:

The following screenings will be at King Fahd Cultural Center (map) and they are open to women only:

The following screenings will be at the Society of Culture and Arts (map) and they are open to men only:

All screenings are free of charge.

I was in Jeddah when Fouad was released, but unfortunately I could not meet him then because I had to leave the next day. Last night he paid a visit to Riyadh, and fellow blogger Sami Omar hosted a dinner in his honor in Shurfa Restaurant. We were also joined by Jihad, Herbaz, Medical Practitioner and Mohammed al-Saleh. Needless to say, we had a great time. It was really good to see him after this long time and I hope we will have a chance to get together again soon inshallah. There is only so much you can say in five hours :-) 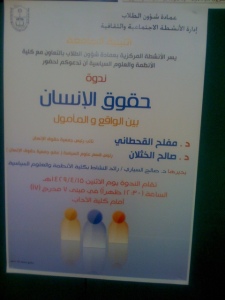 Many people in the KSU community have been excited about appointing Abdullah al-Othman as a new rector. Although I despised all the ass-kissing published in the university newsletter after he took the helm at Saudi Arabia’s oldest university, I must give the man some credit for many good initiatives that he’s been pushing. One of the these initiatives is opening the campus for new voices rarely heard around here.

As part of their regular weekly events, the student affairs deanship at KSU will host tomorrow a discussion panel featuring Mufleh al-Qahtani and Saleh al-Khathlan from the National Society for Human Rights. It should be a good chance to raise awareness among ignorant students — if they show up, that is — and also talk about the current state of human rights conditions in the country.

Unfortunately, I have a practical exam at the same time so I won’t be able to attend, but I will try to finish early and catch what’s left by the time I’m done with my exam.

This is an open event, so if you are interested I highly encourage you to come. Girls are out of luck because AFAIK this event won’t be transmitted to the girls’ campus in Olaysha. Unless, of course, you have the ovaries to come to the boys’ campus and try to find a seat there. A few female journalists were allowed to attend Prince Turki al-Faisal lecture last month at Hamad al-Jassir auditorium.

What: Human Right — Between Reality and Ambition
Who: Mufleh al-Qahtani, VP of NSHR; Saleh al-Khathlan, member of NSHR
When: Monday, April 21, 2008. 12:30 PM
Where: Building No.7, Auditorium 7A, opposite to the College of Arts