You are probably familiar with the name of Abdul Rahman al-Hazza by now. Al-Hazza is the deputy minister of information and culture who made the headlines a couple of weeks ago when he announced that Saudi bloggers need to register their sites with the government, before retracting his comments saying registration won’t be required but is highly encouraged.

Al-Hazza writes a column for Okaz newspaper where he occasionally says things that make no sense, especially coming from a government official.

Take for example his piece today: Al-Hazza talks about how Saudi Arabia has a very small number of journalists compared to the size of its population. He then goes on to say that the country needs more newspapers, radio stations, and television channels. He complains how we, and not I’m not sure exactly what he means by ‘we,’ only think about big newspapers and big television companies, asking: why there are no small regional newspapers, and why there are no local radio and television channels?

You would think that Abdul Rahman al-Hazza, as a senior official in the Ministry of Culture and Information (MOCI), should know the answers to these questions, or at least is working to figure out the answers. As a fresh journalism student, I can’t claim that I know the answers for his big, open-ended questions, but I think I do have a teeny tiny pointer to offer: look at your own ministry!

When MOCI, after 3 long years of stagnation, finally decided to grant licenses for new radio stations to operate in the country earlier this year, the average price was around SR50 million. Just imagine what is the licensing costs for a newspaper or a television channel. I simply don’t believe that the ministry is serious about opening the space for more media outlets in Saudi Arabia.

As the debacle of the new law for regulating so-called “electronic media” showed, they are obsessed with control, and allowing more media outlets in the country means they will have to put so much more work into censoring and controlling these outlets. Why would they won’t to create a headache to themselves? 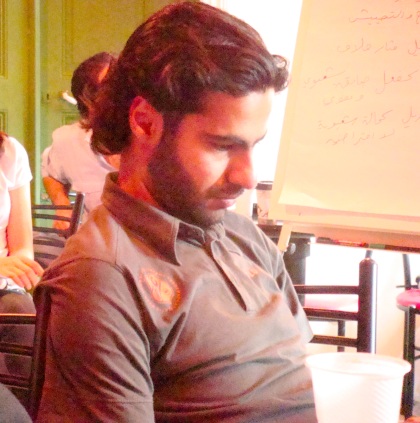 I was shocked to learn that my friend Ali Abdulemam, a leading Bahraini blogger, was arrested yesterday by the Bahraini authorities for allegedly spreading “false news” on BahrainOnline.org portal, one of the most popular pro-democracy outlets in Bahrain. It is not the first time that Ali has been arrested for content published on his portal. I met Ali a couple of times in Beirut, where both of us attended Arab bloggers meetings. He is, in the words of Sami Ben Gharbia, “a pioneer among Arab activists, using the internet to militate for peaceful reform. He inspired many young Bahrainis and Arabs to use the internet to express themselves and engage in spirited debate.”

Please support Ali in any and every way you can: blog, tweet, and follow the updates here.

There have been some conflicting reports yesterday over the blocking of Saudi Jeans in the UAE. The blog Emirates in Style reported the block and provided this screenshot:

When I asked people on Twitter to confirm this, some of them said the blog was indeed blocked, while others said they can still access it. I’m still not sure what exactly is going here here, but I would like to know more. So readers in the UAE, can you please check if Saudi Jeans is blocked where you are or not?

If you think SaudiFlager is not such a bad idea, brace yourself for this: NaqaTube, a website from Saudi Arabia that aims to offer a clean alternative to YouTube, preventing the youth from watching profane or sexually explicit video clips online.

Abu Ibraheem, one of the moderators of the website who did not wish to reveal his real name, told Arab News that clips on NaqaTube are religiously safe and often edited prior to being uploaded. The site also censors clips that are against the government, individuals and scholars, or which mock people in general. Abu Ibraheem added that women’s images are totally forbidden, along with music.

This is not the first attempt by religious people to make clean alternatives of popular internet offerings. Before NaqaTube there was GodTube, JewTube, and IslamicTube. Heck, a Saudi company have been promoting a whole clean internet under the name Gnet for years.

Although I never thought that building Arabic/Islamic alternatives to popular internet services is exactly a good idea, I find myself today not minding it very much. More choices to the people is not a bad thing, I guess. But I still wonder about the prospects of these projects, especially after the recent acquisition of Maktoob by Yahoo!. Is this a sustainable business model? Can these alternatives survive the competition by focusing on such specific niches?

Public demonstrations are banned in Saudi Arabia. We don’t have codified laws, so you will not find any official text that explicitly says it, but everybody knows it. What do we do when we want to protest publicly? We go to the internet and start a campaign online. Back in 2006 I wrote, ”Online campaigning is appealing to many people because most of the time it doesn’t take much resources.” Most of the time it takes little more than starting a freely hosted blog, design a few banners, maybe add a mailing list, and viola! you have a campaign.

This year alone, we have seen a plethora of campaigns that goes from the useful to the useless, and everything in between. We had the Khalooha… series, which covered topics like greed of car dealerships, women’s rights, and marriage expenses among other things. Most recently we had two confusing, similar but apparently opposing campaigns on the issue of male guardianship. But what I want to talk about today is a campaign called SaudiFlager (sic).

SaudiFlager’s goal is to clean up YouTube of videos offending to Saudi Arabia by flagging them. In addition to the unfortunate misspelled name, I believe this campaign has two main problems. First, what is an offending video? What are the criteria for such thing? I mean, what is offending to you can be quite harmless to me, right? So who gets to decide which videos are offending? Second, YouTube is already heavily censored by CITC. Do we need another layer of censorship?

I’m all for free speech, so don’t get me wrong. If you feel strongly offended by a video on the website, go ahead and flag it. Knock yourself out, I’m not going to stop you. Actually, I can’t stop you. But I think that organizing a campaign for such purpose is a just a waste of time and effort. What is worse, it is enforcing yet another form of censorship and that is the last thing we need. CITC is already doing a great job at it that I find myself occasionally amazed by how dedicated they are to this job.

This dedication is shown clearly in their latest blocking spree, which included Twitter profiles like those of @Mashi97 and @abualkhair. Blocking @Mashi97 was particularly strange because it came after he tweeted about having fried eggs for breakfast, which made him think that maybe someone at CITC does not like eggs. Also, what CITC don’t seem to realize is that blocking profile pages on Twitter does not prevent the users from updating. Go figure.

Which brings me back to online campaigns: should we start one to unblock these guys? I think we should, but currently I’m busy with another campaign of mine: Saudi Unflagger. Who is in?

CITC is at it again, this time blocking Susie’s Big Adventure, a blog by an American woman married to a Saudi and based in Jeddah. I did not bother to seek a comment from CITC on why they blocked the blog because they never offered any reason for their arbitrary blocking decisions in the past. Is it because of this post about censorship? The post was so popular and got linked by the likes of The Insider, Idolator, and Perez Hilton (which is also blocked here).

You can help by going to this page and filling the Unblock Request form. As for Susie, if the blockage continues, she probably should contact NSHR to look into her case.

UPDATE 31/05/09: The blog has been unblocked. You can access the blog from Saudi Arabia again now.