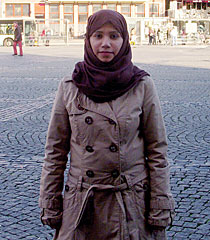 Arab News offers this glimpse into the lives of some Saudi girls who are studying in the Netherlands. They talk about adapting to life in a liberal society; about how does it feel to be independent and free. They also talk about things like riding a bicycle or doing their own paperwork. Simple things, sure, but are they going to accept being denied of these things, let alone other much more important things, when they come back?

When I wrote about the scholarships girls back in November and suggested that they will play a pivotal role in reforming the country, some people disagreed and argued that this will not happen because the girls are simply as hypocrite as the guys. I think that’s a possibility, but I’d like to remain optimistic.